A few months ago I headed down to one of my favorite places; Southend.

Now until a couple of years ago, I had never been to that part of the country however I had the pleasure of working with Miss Irregular Grace, owner of “LeKeux Essex” on a couple of photoshoots.

The first one was a summer shoot with party dresses, tea and dancing. 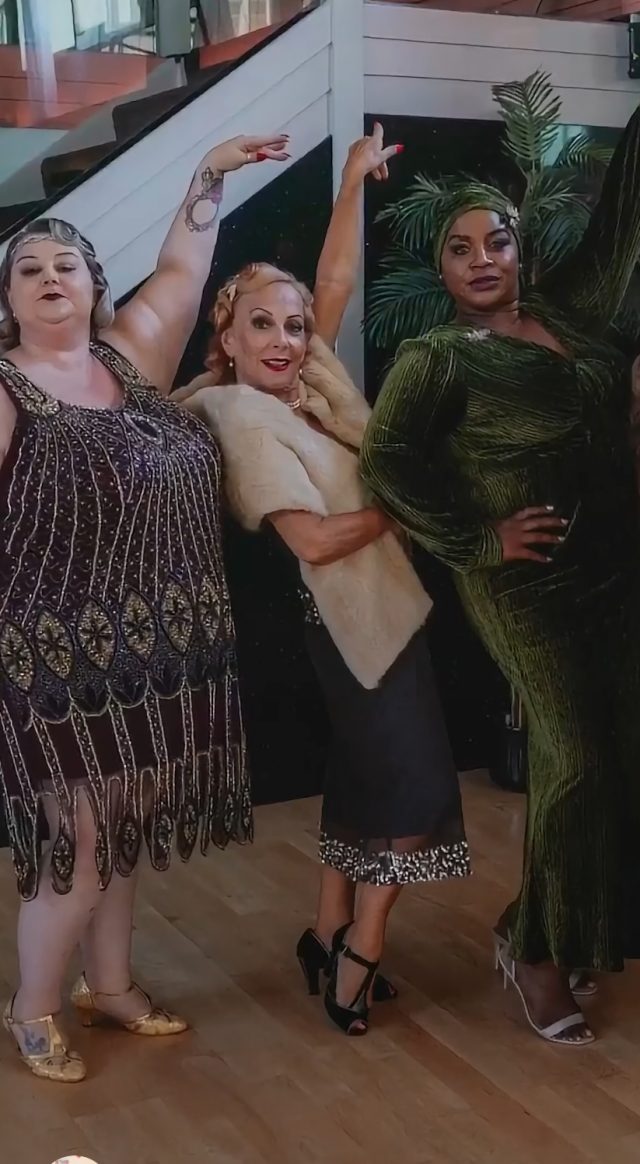 I went back for a second shoot which was in a fabulous Art Deco building, wearing flapper dresses and had a real 1920’s vibe.

This next visit was completely different and VERY Secret Squirrel. 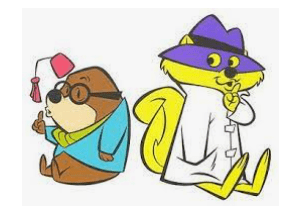 For those of you too young to remember that, it was a cartoon from the 1960’s by Hanna Barbera. Secret Squirrel and his sidekick, Morocco Mole was a parody of the James Bond films from the era.

I headed to Southend on a secret mission; to visit, take part in photoshoot and not say a word about it.

And I think I can honestly say I managed to pull it off quite successfully! 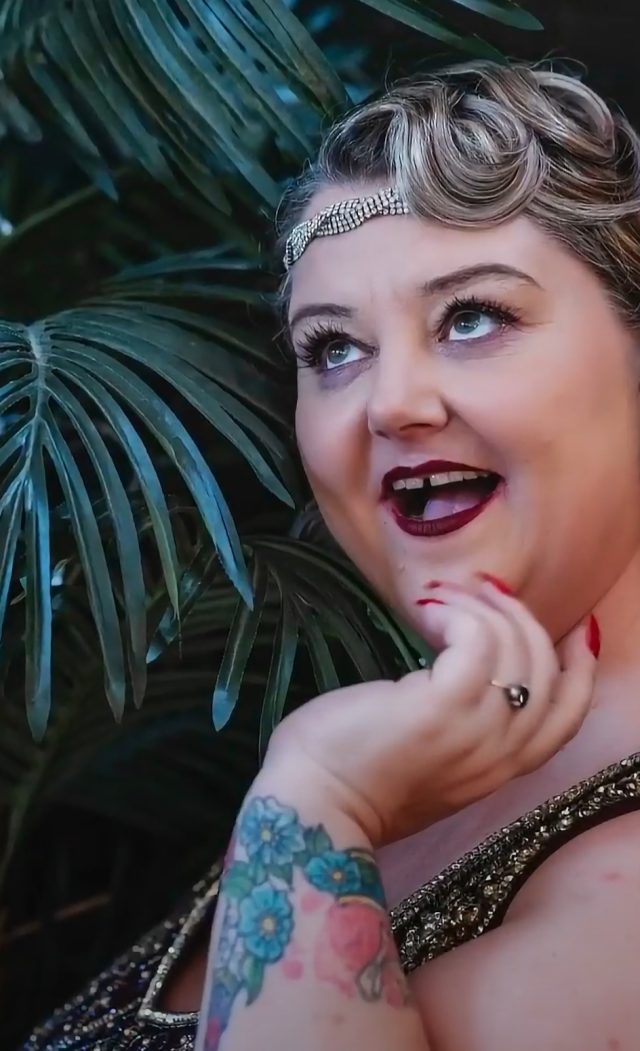 The reason for the secrecy was that Anna (Miss Irregular Grace) wanted to put together an e-book showing exactly how to do vintage styles that you could see on the television.

The stars of Mad Men, Queens Gambit and even the beautiful Priscilla Presley.

As for me, who exactly would I be portraying? 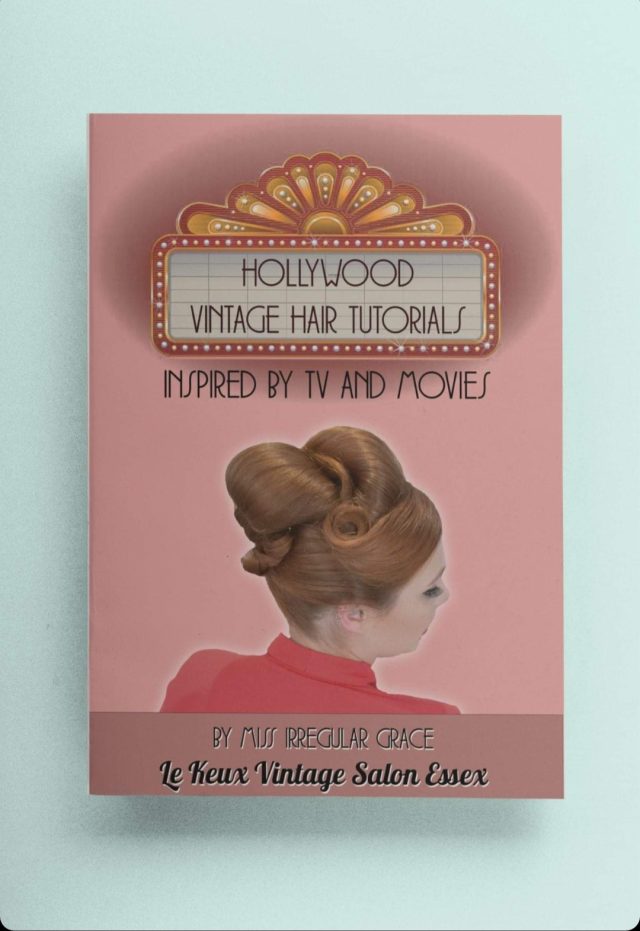 Only the super glamorous yet twisted “Ratched”.

Now if you haven’t seen the show, it is a spin-off from the classic film “One Flew Over The Cuckoo’s Nest” and is based around the character Nurse Ratched.

She has the most amazing wardrobe and hair, which I was a little bit daunted about. 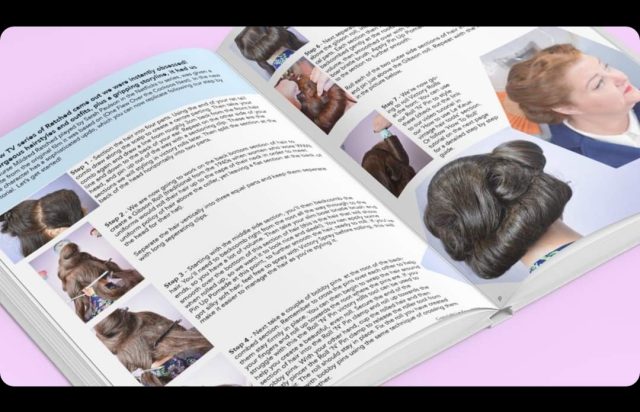 However, Anna sat me down in the chair and did my make-up initially. She then started the preparation for the hairstyle. Taken each section, she combed, teased, placed and set, taking a couple of photographs of each stage.

She did this as she went around my whole head; pinning, back-combing and tweaking here and there.

I was instrumental in the photographs in that Anna would start the next section off, arrange it exactly how she would want it and then got me to do it, as she took more photographs. 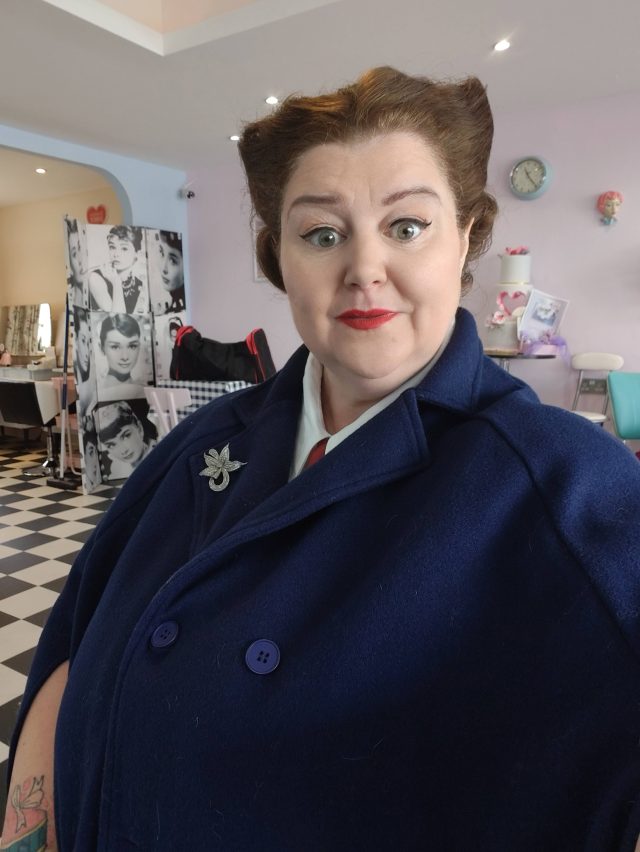 We spent a couple of hours constructing, de-constructing and reshooting everything that Anna would need for the book.

The end result was a beautiful creation…

Side Victory rolls, a Gibson Girl roll at the back and separate sections pinned and curled.

Anna took a final video of the whole finished look, and it was a wrap. 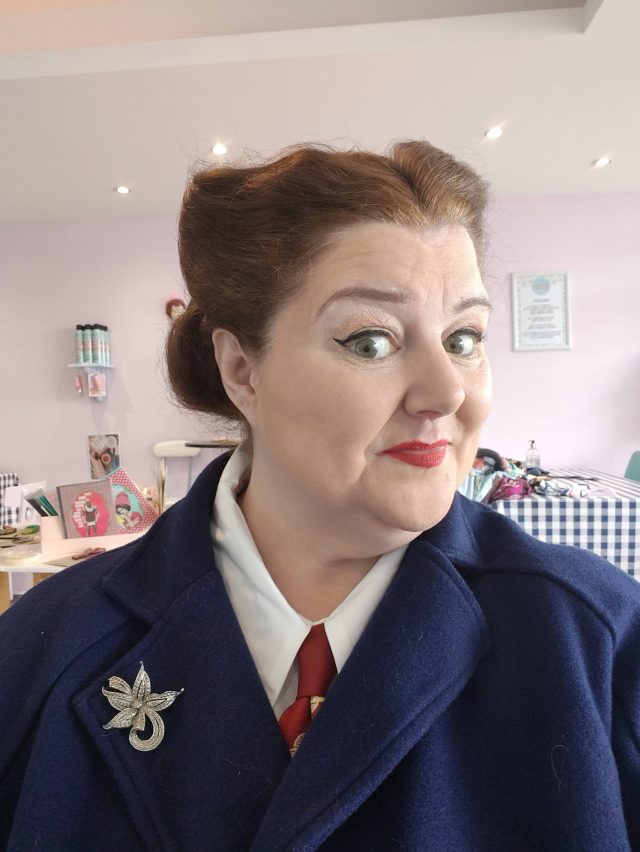 In the salon was Carol the Carousel Horse and we messed around a little, taking shots and generally being silly. All in all, a great day was had and I loved the end result. 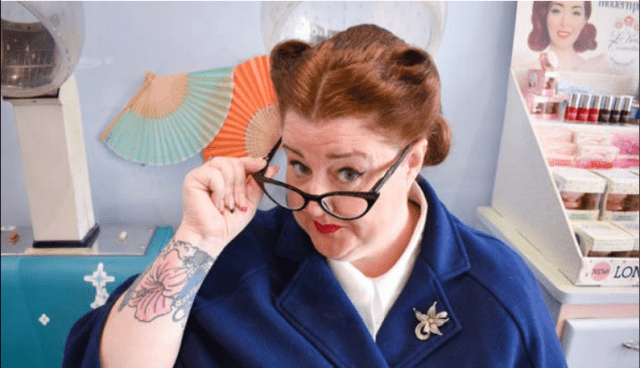 Fast forward a month and I put out a sneak peek of the Southend visit; close ups of the side of my face, the corner of my head, collar of my cape.

Nothing that showed off any part of the reveal OR gave a hint to what I had been doing. Just a heads up that something good was coming… 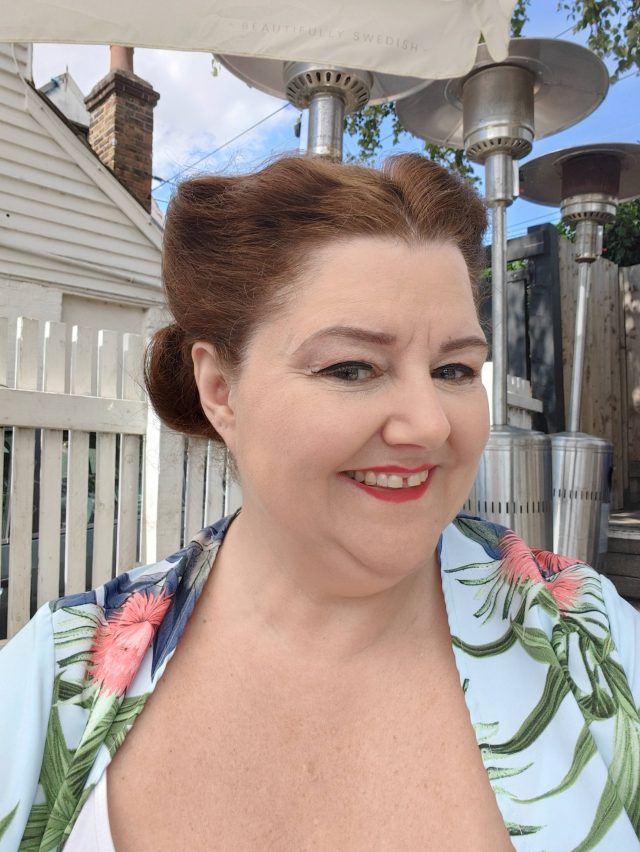 Finally the day came when I received an email from Anna telling me that the book was available for download!

Super excited, I went straight along to view it and see all the different ladies and the creations that Anna had come up with.

The Marvelous Mrs Maisel, a couple of Mad Men ladies, Queens Gambit, Ratched, Last Night in Soho and of course, Priscilla were all included in the publication along with other hairstyling tips such as creating Victory Rolls, back-combing and even all the equipment that you would need.

It really is a great read, full of helpful hints and advice, especially for those who are new to the vintage look or struggle in creating different styles. 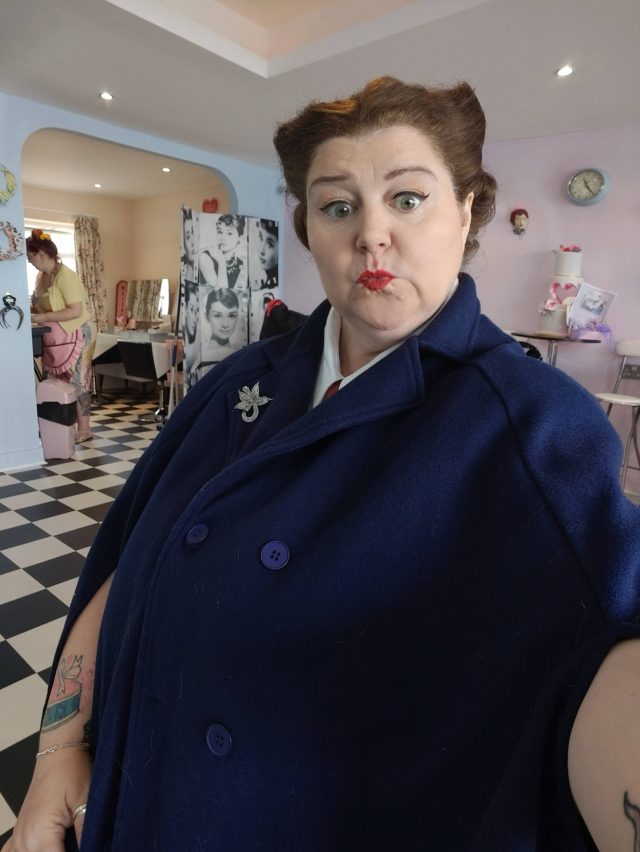 As it is an e-book, you can download it immediately so you don’t need to wait for a parcel to arrive and bring it up on your tablet or laptop to look at whilst creating whichever ‘do takes your fancy.

Obviously I have included some snippets of photographs here to give you an idea of ​​what you will get in the book, but it really is much more detailed than what I have shared.

You can get your copy for the bargain price of £9.95 by clicking on this link here

Oh, and if you want to see a couple of the out-takes…Check out the Le Keux Instagram page. Here are I am having some fun with Carol 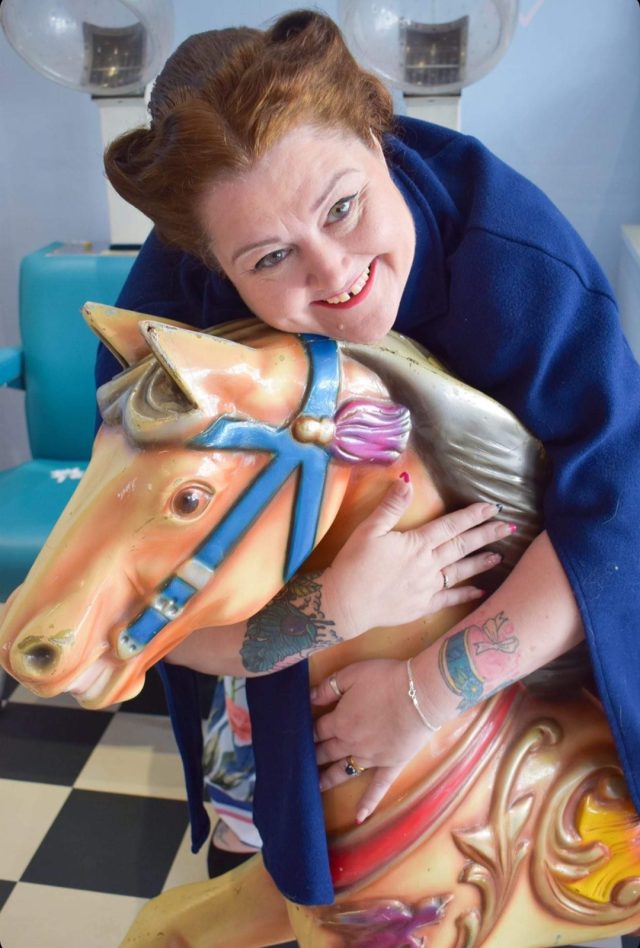