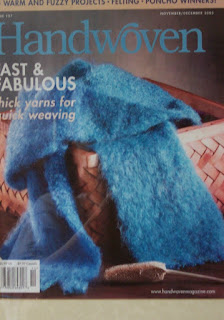 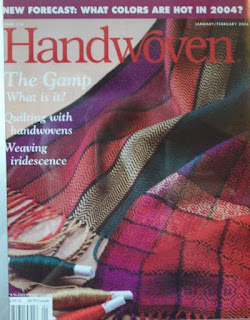 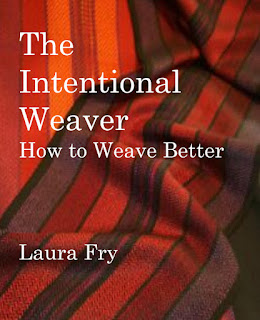 Instead of getting dressed (yes, I’m still in my jammies) and getting on with my day (finish pressing those damp towels, finish threading the Megado, write for a couple of projects waiting in the queue) I find myself thinking about writing in general, and why *I* write in particular.

Well, first of all, I have used writing as a tool to help me think through the swirling random thoughts that tend to pinball around inside my skull. I have done this for a long time, first through letter writing (yes, actual pen to paper letters to distant friends), then as part of therapy to work my way through some issues I was dealing with, but also to think through problem solving for weaving.

A way to order my thoughts. Because my thoughts would look more like a tangled ball of yarn than a nice tidy skein if I didn’t try to bring some order into the chaos.

Sometimes I find myself with a niggling thought that simply won’t go away and I mentally poke and prod at it until I can find an ‘end’ and begin to follow it through the tangle. Writing it down, now via a keyboard rather than pen and paper, helps me track my thoughts to some kind of conclusion. Something that I might have been leaning towards without understanding why. By following my thoughts in this fashion, it becomes a bit of a road map and I can see why I feel the way I do about, well, things.

Now none of that means that my thoughts ought to ever see light of day! Some of them are best left in the dark, frankly.

But I live in a community. It may be mostly distant, but in the 21st century we have ways to communicate beyond the physical. We don’t even need pen and paper anymore when we have the internet!

And so I entered the ethereal world of the World Wide Web in 1994 via a Free-Net portal. I got one hour at a time via a dial up connection (remember those ‘handshakes’?) and I joined a Usenet group – rec.textiles.weaving or something (memory fails) and began to communicate on a much more personal level with weavers all over the continent and beyond, daily.

What I saw was a thirst for knowledge, and people without resources asking questions while people with knowledge shared what they knew.

So I began answering questions. Because I knew stuff.

By that time I had been writing for publication for years – The Weaver’s Journal, Handwoven, Heddle, Handwoven, and others. So I had some experience writing technical stuff.

I was also pretty confident that I knew stuff. Maybe overly so. There is nothing like a little hubris to carry one through something that is a bit daunting, a bit scary!

I was also in the final stages of research for the GCW master level and by this time I knew quite a lot about wet finishing. So I chimed in, repeatedly, with suggestions and information on what wet finishing is, and why one might consider doing it.

One day I typed up a rather long response and used the ‘hashtag’ (although we didn’t actually use them, yet) ‘It isn’t finished until it’s wet finished’ and said that I’d now be quiet about the topic .

I received a lovely email from one of the members of the group, Tom Beaudet (professional textile engineer) who urged me to keep speaking up about how important wet finishing is. At that very point in time I was feeling very insecure in myself and I asked him if he would mind taking a look at my very rough draft/notes for my ‘thesis’?

Bless him, he said yes. So I closed my eyes, copied the file into the email, warts and all, and sent it.

The very next day he sent the file back with his notes – which essentially affirmed everything I had said, and even complimented me on an example I’d used to try and explain fulling with the comment that he hadn’t ever considered that, but it made perfect sense.

I also received some crucialment from Allen Fannin and in the end finished my thesis/monograph, and eventually submitted and achieved the status of ‘master’ from the GCW.

Before I had even completed the level, however, people started asking more questions and some urged me to publish.

And the rest, as they say, is history.

So why am I thinking about all of this?

Well, I self-published both of my books. Magic in the Water was a hefty tome that contained (originally) 20 samples – and not stamp sized, but big enough that people could actually handle them, of fabrics before and after wet finishing. No ‘traditional’ publisher would touch such a project. (Tom Beaudet later said that industry makes these kinds of publication routinely – or did – and the price tag would be in the thousands, not hundreds of dollars).

So in addition to researching, writing, weaving the samples (with help from a few others), Doug and I took on the monumental task of preparing the cloth to be stapled onto card stock and then assembling the pages of text and sample pages. Again with some assistance from friends.

And I did the marketing.

Eventually I added value to the publication to try and sell the balance of the copies by adding two more projects making the later volumes 22 projects. At times I also added other things. But I never lowered the price. Because I felt it was worth every penny to the people who wanted the information.

When I finally (finally!) Sold all of the original (nearly) 1000 copies, there were still some requests for the information so while I was sidelined during the summer of 2011 (chemo sucks, but here I am) a friend helped me photograph all the samples and another friend made a PDF that I could sell to anyone willing to settle for that.

Then later, when I was writing the second book, I decided to self publish again and found blurb.com and my editor (many thanks to Ruth Temple for the book mid-wifery) we used that PDF to test the blurb website.

And then published The Intentional Weaver on that site.

And now? A few people have suggested I write another book, but honestly I don’t think I have the time, energy or finances to create another book. The market for books about weaving is pretty darned small for the effort required.

But I can still post to this blog. I do still sometimes answer questions on-line, although less frequently these days. If people want to know what I have to say, I’m easy to find. (New re-freshed website launched yesterday.)

And I have other projects on the burners.

So, while my writing days are not over – yet – I can’t see myself producing another ‘book’.

And that’s ok. Two is probably quite enough to add to the genre.

As I wend my way through the twilight years of my life, I doubt anyone would be able to stop me from musing here. When people lament that blogging is ‘dead’ I know that a number of weavers continue to blog. We are just quieter about it these days, I guess. Or younger people don’t know about blogs. I belong to several FB groups, but no groups outside of those days. I do belong to a couple of Ravelry groups but rarely go there now. Instead I am focusing my time and attention on the School of Sweet Georgia. I am supposed to be ‘retired’ after all.

But I’m still weaving. Still learning. Still trying to help others. And that means I will keep writing.

Check out blurb for my two books. Feel free to email me laura at laurafry dot com Or keep reading my blog. Nice to have you along for the ‘ride’.

Oh – and the reason this post was spurred? I started thinking about what would make a ‘best seller’ in the weaving world and began to add up how many copies of each I sold – 900 full sized versions of Magic, an additional 50 of a smaller version (because I ran out of samples ). As for The Intentional Weaver, the numbers are harder to work out because blurb lumps both titles together so approximately 620. Plus a bunch of Magic PDFs I sold directly and never bothered to count.

And maybe this post is one of those that should stay in the dark, but…