As regular readers know, I am a great fan of a musical.

Whether old or new, I am at my element when watching a cast of characters singing their hearts out, telling the story through the medium of music.

It was because of this that we had visited ‘West End Live’ on a few occasions. Well that is until COVID hit and everything came to a standstill.

Of course, when I noticed that it was being held again this June, I was super excited and made plans to attend on the Sunday.

I had also seen that Sky VIP had a competition to win tickets to their VIP lounge. I entered not expecting to win, however I had received an email to say that I had two tickets for a slot in the afternoon.

Even more reason to attend!

For those of you who don’t know anything about it, West End Live is a two day event held inside Trafalgar Square. The casts of many theaters attend and perform one or two songs from their shows, all free of charge!

Saturday featured Beauty and The Beast, Moulin Rouge, Wicked, The Book of Mormon, The Phantom of The Opera, Cabaret, Jersey Boys, Mamma Mia, Six and even Magic Mike, to name a few.

Sadly I couldn’t attend but knew Sunday would be equally brilliant.

Driving up, we decided to take a picnic, some chairs and even a bottle of non-alcoholic wine. We parked near to St Johns Wood, hopped on the train and arrived around 12.

And walked into complete pandemonium!

The previous times we had visited, had been busy but NOT like this. The square was already packed, there were people milling all around and we struggled to make our way to the queueing area.

And found that the queue was all the way round the block and there was no sight of the end. Deciding to just find a spot to sit outside of the square, we happened upon a little area by the gates of the Royal Academy.

Not A Bad Position

This was just by a large screen so we could see and hear just what was happening on stage.

We set out our camping armchairs, and settled in to listen.

First act of the day was Heathers, then Fantastically Great Women Who Changed The World which seemed quite interesting.

We unpacked the picnic; cheese scones, pork pie, fresh bread and more. Out came the crystal Champagne flutes and I even remembered to take a parasol to shield my delicate skin from the blistering sun.

Hamilton was amazing, as was Les Miserables. Things were turned up a notch with Get Up, Stand Up, The Bob Marley Musical before moving onto Back to the Future.

Sharing wine and food in the sun was simply wonderful. No stress or pressure and just live music to listen to; a perfect way to spend a Sunday.

Matilda, Pretty Woman, Six, Sister Act and Magic Mike were all performed before it was time to take our slot at the Sky VIP Lounge where I had won two tickets.

Queueing up meant that we couldn’t see the stage, but the sound was still clear. When we got to the front of the queue we were given a West End Live program and some vouchers for drinks and sweets inside the lounge.

Walking through you could get your face painted before picking up your drinks. Unfortunately my knee was really problematic at this point and I knew I would not be able to stand for long enough.

The bar was the next place to walk past so we collected our free drinks from a choice of Pimms, Lemonade or Water. A bag of fizzy sweets were handed over and we walked in further to try and find seats. 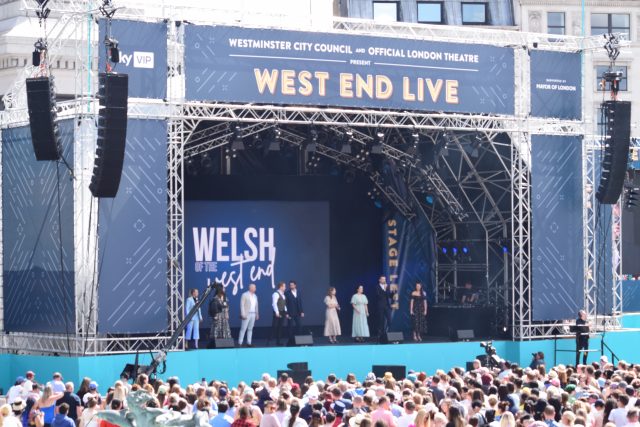 Welsh At The West End

Basically the lounge was a large raised marquee set right in front of the stage with optimum views. It was a massive space and soon became quite filled up. Unfortunately there were not many seats as it had been set out as a standing area with a number of bar stools.

Thankfully one of the VIP staff, was passing and I asked if there was anywhere else to sit as Mum was feeling unwell and my knee was in agony. 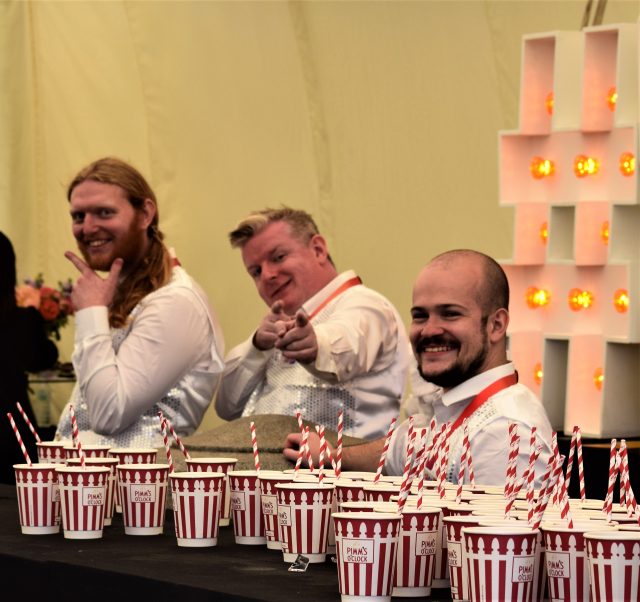 He was so kind and managed to find a stool which Mum took and I walked around a little to get some photographs of both the shows AND the VIP area.

We were treated to Diva, The Great Gatsby, Unfortunate (The Untold Story of Ursula The Sea Witch) Welsh of the West End and Footloose. 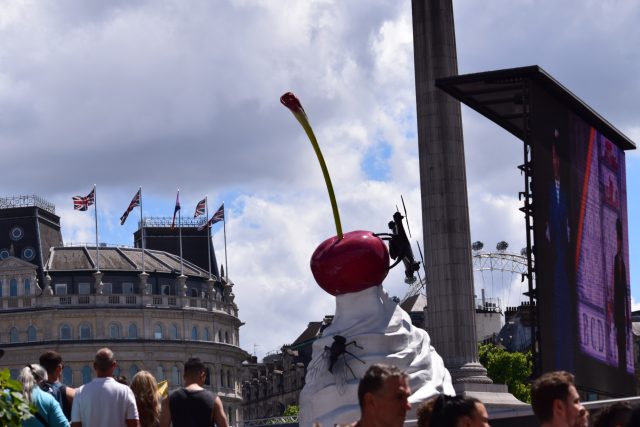 During these performances, Mum popped to the ladies and I took a seat on the stool.

You can imagine my surprise when Paul from Sky VIP came and stood in front of me, saying he was looking for a Diva.

I had uploaded a selfie on Instagram of myself in the VIP area and he turned his phone to show the photo and asked ‘Is this you?’

Obviously I replied it was and he handed me a golden envelope! 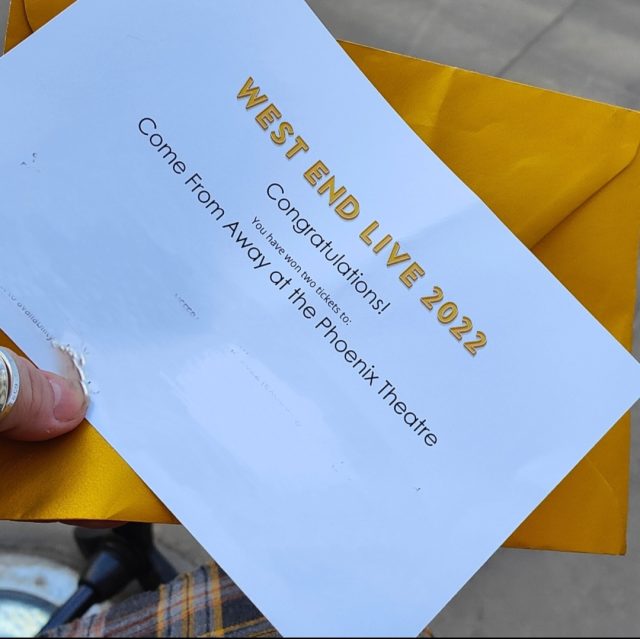 I hadn’t realised but they were running a ‘competition’ in that everyone who uploaded a photograph and tagged #SkyVIP were in with a chance to win tickets to one of the musicals on stage.

During our hour long slot in the lounge, I had been picked out!

Asking me to open the envelope, I pulled out a card showing that I had won TWO tickets to the hit musical, ‘Come From Away’

To say I was absolutely dumbstruck was not an exaggeration. I simply did not know what to say and I think I stuttered my way through the presentation.

I mean, what are the chances? I had won the two tickets to the VIP Lounge, where I had now won two tickets to Come From Away. It was absolutely smashing.

Such a lucky girl indeed!

Eventually our slot in the lounge was up so we got ready to leave. When we exited the area, we were handed aSky VIP goodie bag with a West End live enamel pin badge, a Sky VIP water bottle and a baseball cap.

What a lovely bonus indeed.

Heading back to our camping chairs, we were treated to We Will Rock You, Chess and Kinky Boots as we packed up our picnic remains and chairs.

The area had cleared out quite a lot as it was almost the end of the event, so we headed along to Leicester Square tube station to get back to our car. 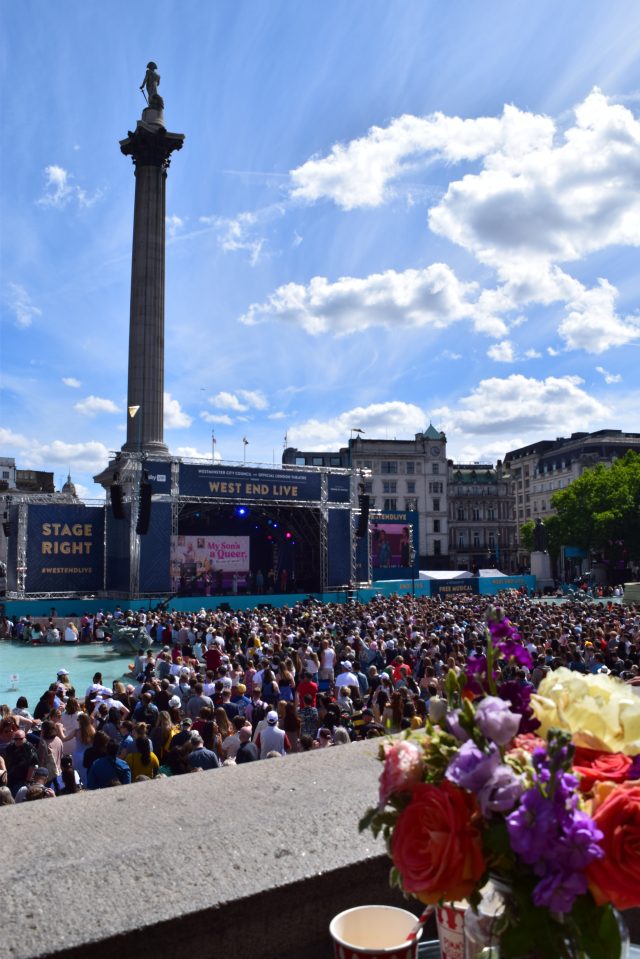 We could still hear the performers as we made our way down into the tube.

Another great day with an even greater outcome.